We had an absolute blast at Disney this year.  The weather was perfect, it was crowded, but not unbearable and it is just so fun to see Poppy (and Sam's) reaction to everything.  There is something about being there that really is just magical.
First, we decided to stay in Disney this year.  We stayed at the Port Orleans French Quarter, which was recently renovated.  It was super cute and really looked a lot like the French Quarter in New Orleans.  I wish I would have taken a few pics of the actual hotel - it was that cute! 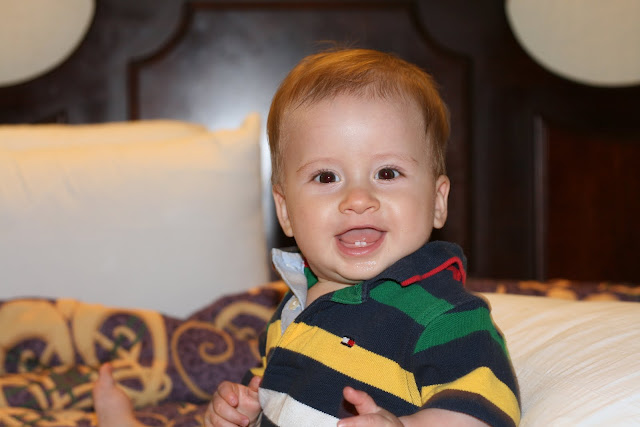 The first day we just checked in and relaxed and then we decided to go to the Boardwalk for dinner.  I was picturing us getting some ice cream afterwards and strolling along the boardwalk.  Well, I think Marc described it best when he said "I feel like we're walking into a blow dryer."  It was soooo hot.  And humid.  The entire boardwalk was just intense sun and heat, with absolutely no shade anywhere, and barely any other people either (because it was too hot!).  We grabbed a few sandwiches and ran back to the ac of our hotel room.  I took this picture of Poppy sitting on a bench in the lobby of the Boardwalk hotel while we were waiting for Marc to get the car... 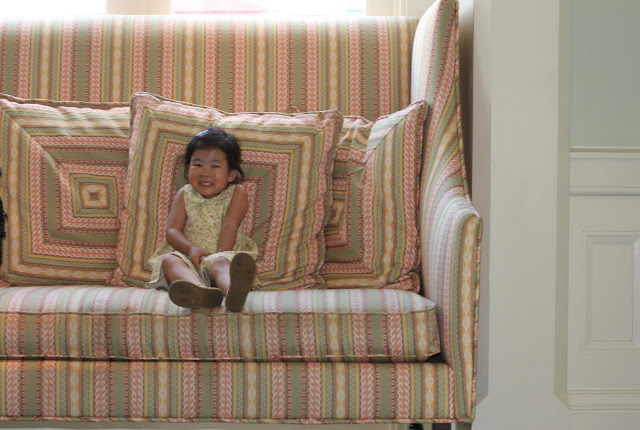 {doesn't she remind you of Alice in Wonderland?}
Then the next morning we set our alarm clocks for bright and early to beat the crowds at Magic Kingdom.  The first ride we headed to was Dumbo.  Last year the line was always too long and Poppy didn't get a chance to go on it.  But because we got there so early, we were able to go on it a few times with no lines.  She loved it.  We even brought Sam on it once. 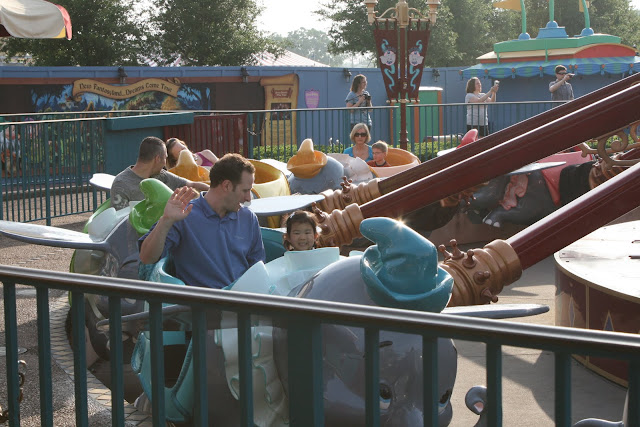 After Dumbo, it was off to Breakfast with the Princesses.  Marc made these reservations 6 months ago.  I thought he was a little nutty about it, but it turned out to be so worth it.  First we were greeted by Cinderella in the foyer and had a family picture taken with her.  Then once we went inside and were seated, each princess came to our table individually and talked to Poppy and took pictures.  Poppy was so excited to meet each princess, but she clammed up and got nervous and shy when they actually got to our table (of course!). 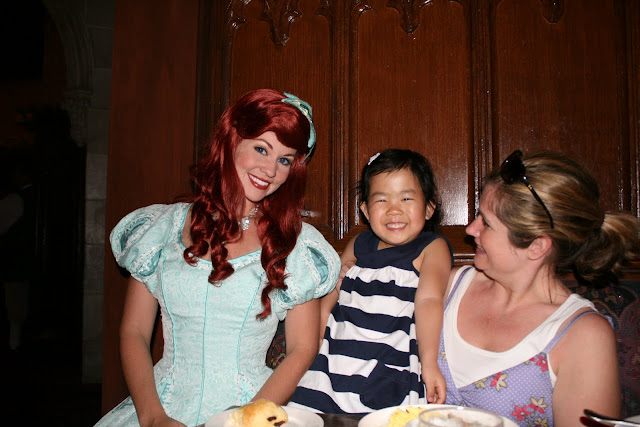 Ariel was the first princess to visit our table.  We also met Jasmine, Sleeping Beauty and Belle.  Poppy says that Belle was her favorite because she likes to read as much as Poppy does.  The waiter also gave Poppy a magic wand and Sam a plastic sword.  Poppy carried her wand around all day, and Sam was wielding his sword around all day too! 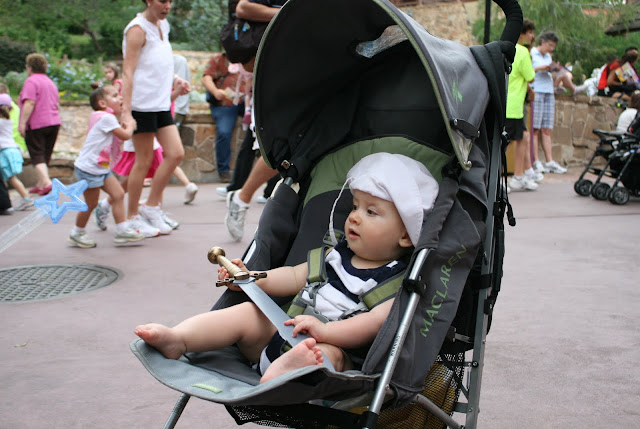 We went on a ton of rides.  Poppy was just a hair too short to go on splash mountain, but she said she is going to eat her veggies so that she can grow and go on it next time.  Her favorite ride was Peter Pan, which she made us go on at least 3 times.

Leading up to our day in Disney, I was pretty worried about how Sam would be.  It turned out that he was a total champ.  He slept in his stroller for 2 hours in the morning, woke up in time for lunch and to take the jungle cruise.  Passed out in his stroller for another couple of hours and then woke up for dinner.  We had dinner at the Crystal Palace where each table is visited by the Winnie the Pooh characters.  Poppy could care less about Winnie the Pooh, but Sam absolutely loved these characters!  He just stared at them and smiled.  We have a video of Piglet kissing Sam over and over.  It was so cute! 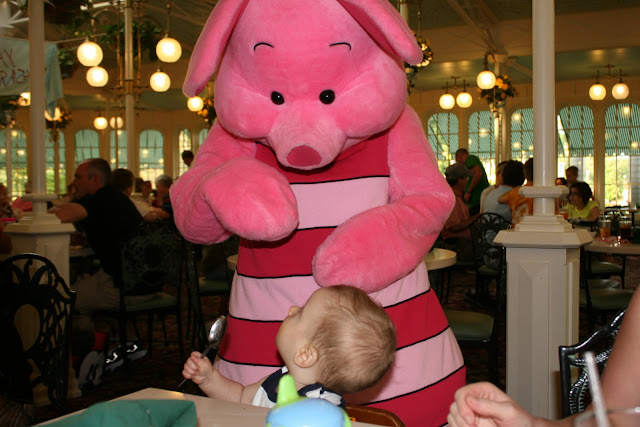 We stayed for the Electrical Parade which was the highlight of the day for Poppy.  Sam was of course sleeping like a baby in the stroller.  We were so exhausted by the end of the parade that we called it a night.  It was so nice to be able to hop on the monorail and go back to our hotel, instead of drive back to our condo like we did last year.
The following day we just lounged at the pool all day.  The pool had tons of fountains and water slides, which was a lot of fun. 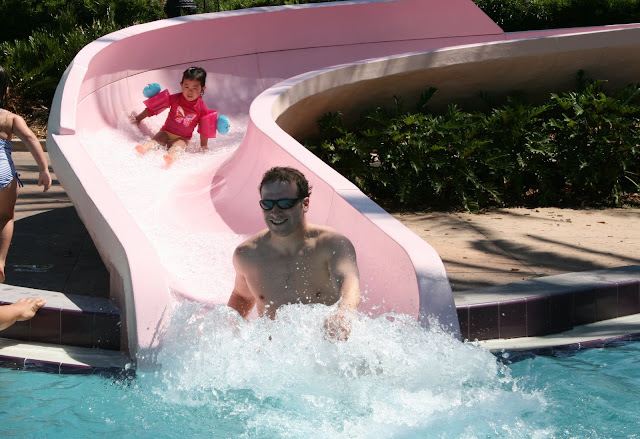 Poppy even got to meet up with her friends Brendan and Colin while we were there!  Everyone met at our hotel and we took the riverboat to Downtown Disney for dinner and ice cream. 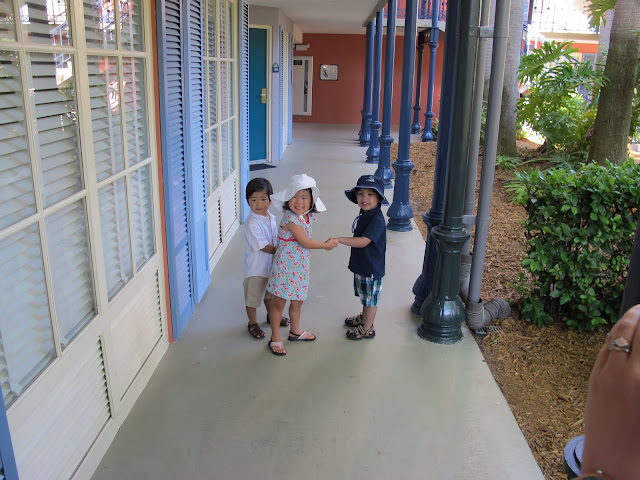 Poppy was so happy that she got to boss two boys around.  She was quite the queen.  Maybe next year we'll be able to meet up again and spend a little more time together.  Poppy has been asking for her boyfriends to come over ever since... 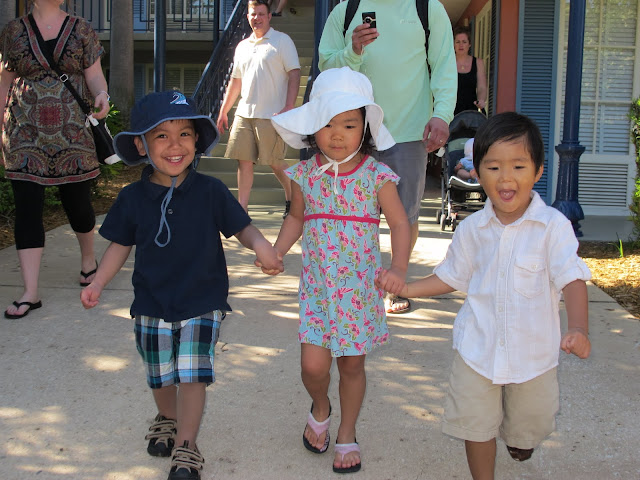 We really didn't get to take too many pictures because we were just so busy while we were in Disney, but it was such a great time.  Magical.
Posted by Amanda on Thursday, April 28, 2011

Email ThisBlogThis!Share to TwitterShare to FacebookShare to Pinterest
Labels: vacation

We're hoping to go to Disney next year and I can NOT wait! I've heard such great things about the character meals... would love to know how you guys went about booking everything.
So glad things went so smoothly!

We need to coordinate a better plan for next year so we let the kids play and relax a bit.

This looks like it was a blast! So much fun... I loved each and every one of the photos...