day in the life series

I mentioned last week that my maternity leave is almost over and I am having so many mixed feelings about it!  On one hand, I think that I will be ready to back to work.  I miss getting up at a set time every morning, having to get dressed and look presentable, socializing with adults, bringing home a paycheck, etc.  And most importantly, I absolutely love my job.  On the other hand, it stinks that Poppy and Sam are going to be at two different places (Poppy in school full time and Sam at the same home daycare Poppy went to) and it really stinks that I have to work full time.

Regardless of my mixed feelings about going back, I am so, so, sooooo grateful that I had the opportunity to stay home with my babies for two full years.  I know so many people that are not able to do that and I feel incredibly lucky to have spent so much time with my two favorite little people.  These two years, living our simple life at home, have been the best years of my life.  And I want to remember every single little boring detail during this time.  Blogging has definitely been on the back burner for me lately, but I am about to step it up with a little "day in the life" series.  I am going to try to snap a picture every day that really captures this period of time while the kids are still so little and our lives are so simple.  Having my time to just hang out with Sam while Poppy is at school every morning, having lunch with Poppy and Sam every.single.day, the way they play together, helping me make dinner every day, reading together, I want to remember it all before the pace of our lives picks up.  I won't be posting every day, but I really hope to take a picture every day until I go back to work... 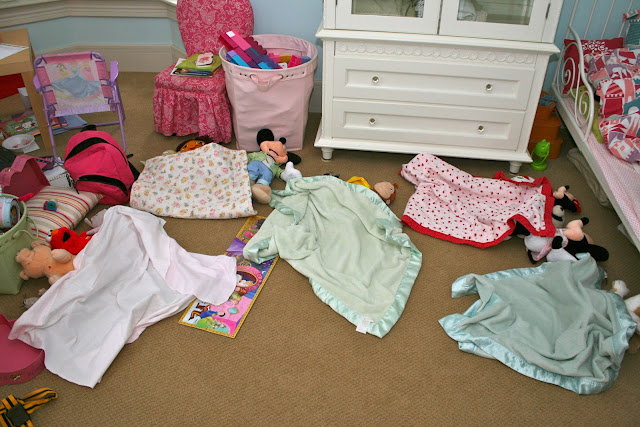 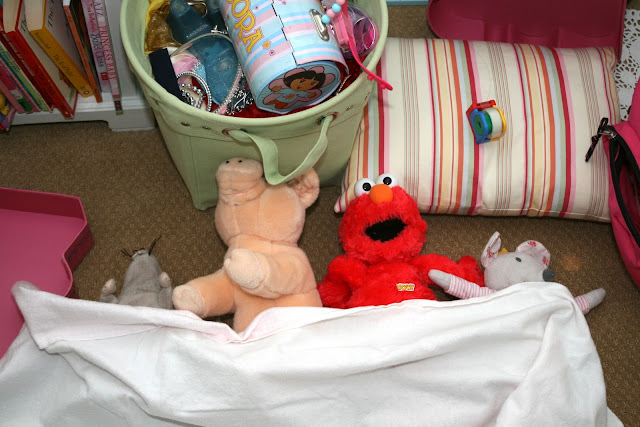 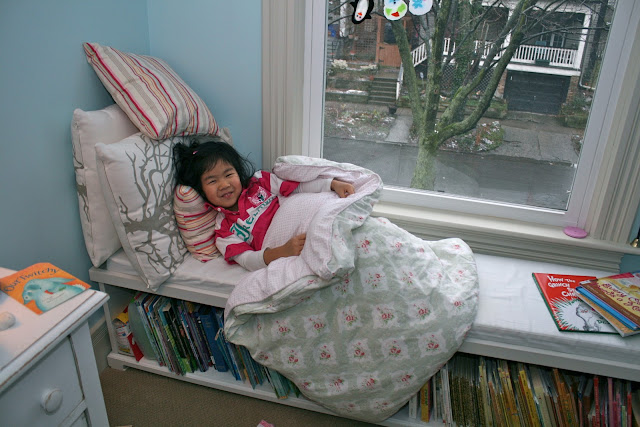 Email ThisBlogThis!Share to TwitterShare to FacebookShare to Pinterest
Labels: day in the life series, work

*Proud mama alert*
Today was Poppy's much anticipated concert debut.  As I type this, I am still in shock that she did it!  Her teacher asked her if she would like to perform on stage sometime before Christmas and her answer was, "No, I will let you know when I am ready."  And then after Christmas her teacher asked her again and when I mentioned that we would go out for ice cream afterwards, she quickly changed her answer to, "Yes!  When can I do it?!"
Here is the video, followed by a play-by-play in pictures...  (The concert was at her music school - Buffalo Suzuki Strings.)  (and check out Sam trying to get on stage just as Poppy was going on and then you can hear him applauding at the end)
Waiting for her turn to perform... 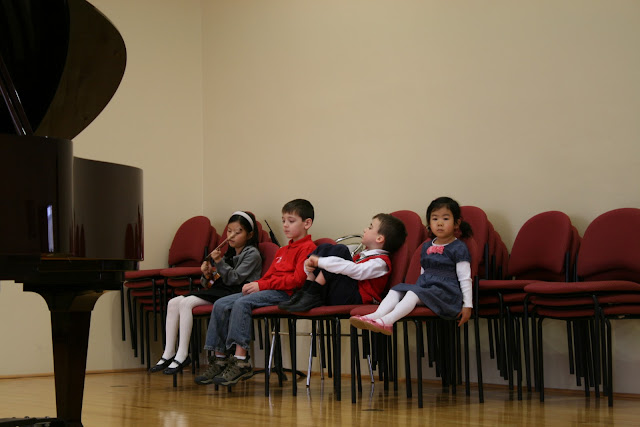 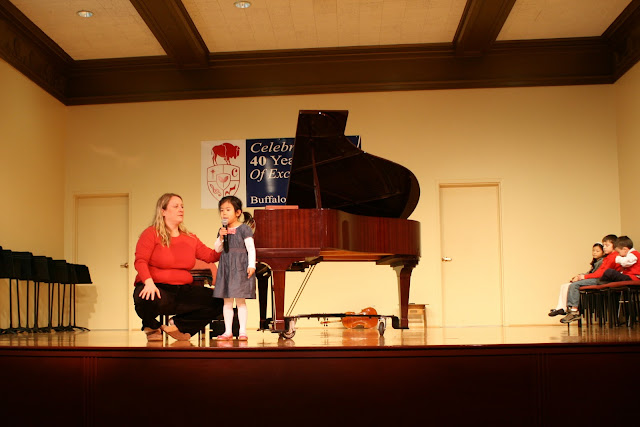 She did such a great job! 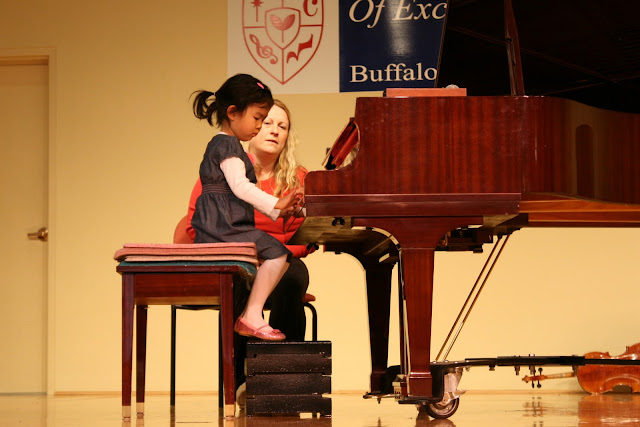 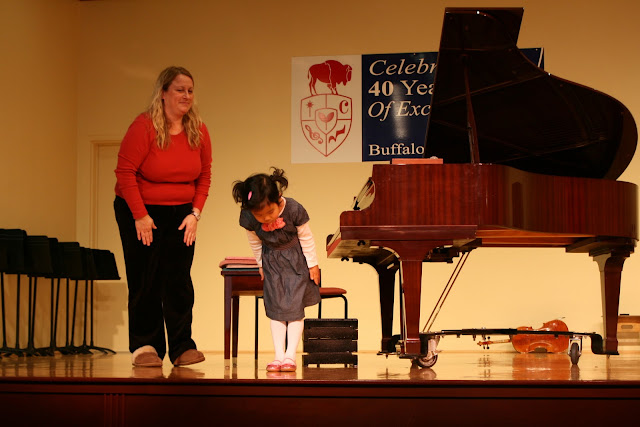 And the sweet treat afterwards... 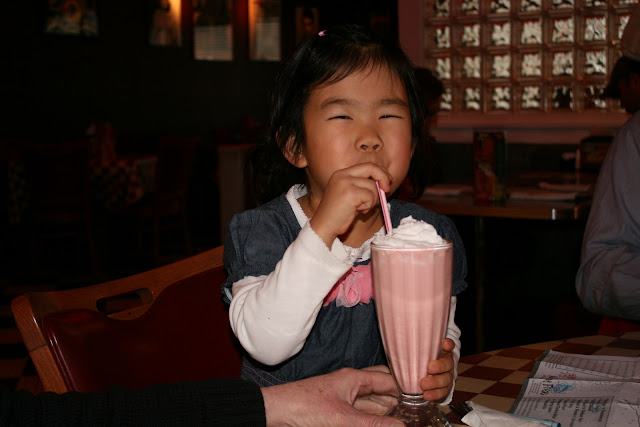 We are seriously so incredibly proud of her.  She has gone through such a transformation over the past few months - growing up both physically and mentally.  And I am so excited that we stumbled upon Suzuki Strings.  It was just this past summer that Marc and I both thought Poppy might like piano lessons and when I checked around for a place that would teach her at 4 years old, Suzuki Strings was the only place that I could find.  It has been a huge time commitment, but seeing how confident Poppy was up on that stage makes everything worth it.  I am a seriously proud mama today. :)
Posted by Amanda on Saturday, January 28, 2012 7 comments

We have been quite busy this week, celebrating the new year.  Last year I went into Poppy's classroom to make a Korean snack and read a book about the Korean culture.  This year I was asked by the directors of her school to come in and present to the entire school.  Poppy was soooo excited that I would be teaching her friends about Korea.
First I went into her classroom and made hoddeok (Korean sweet pancakes) which were a huge hit with the kids... 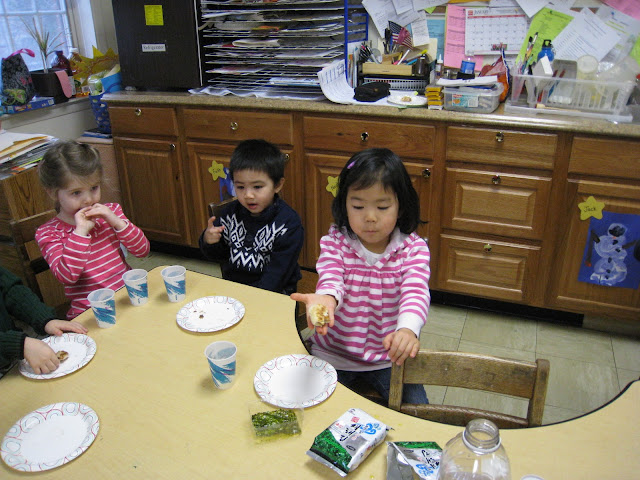 Then Poppy changed into her hanbok and together we did a little lesson about the Korean culture at chapel... 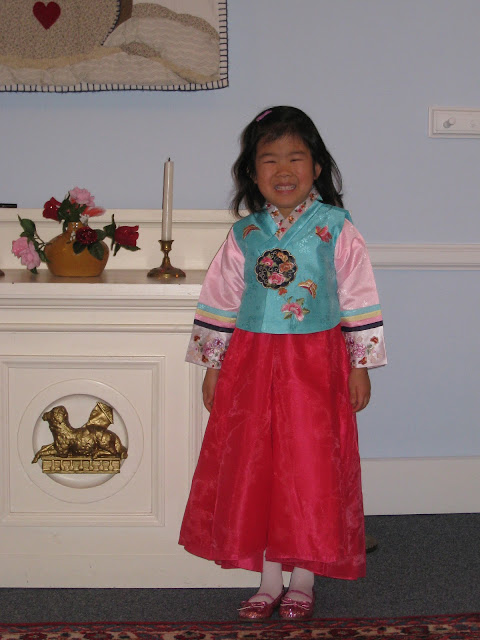 We talked about where Korea was on the map and how Poppy was born there, we talked about her hanbok and the tradition behind it, we showed them her dojang stamp and finally we listened to a few Korean songs. 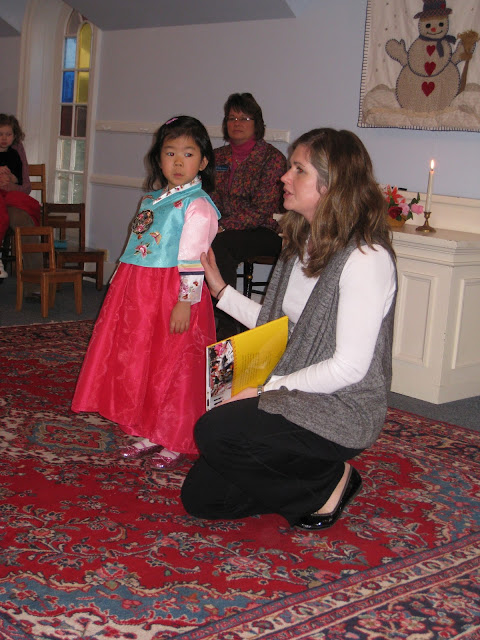 I was surprised by how excited the students were to learn about Poppy's culture.  They're still talking about how beautiful her dress was and how yummy the pancakes were.  And Poppy was in her absolute glory being able to stand in front of the entire school with her mom.  She said she wishes we could do that every day.  Sniffle, sniffle.
..............
In other news, at any given time on any given day, you can find Poppy writing a love letter to Ty.  It's her new favorite thing to do... 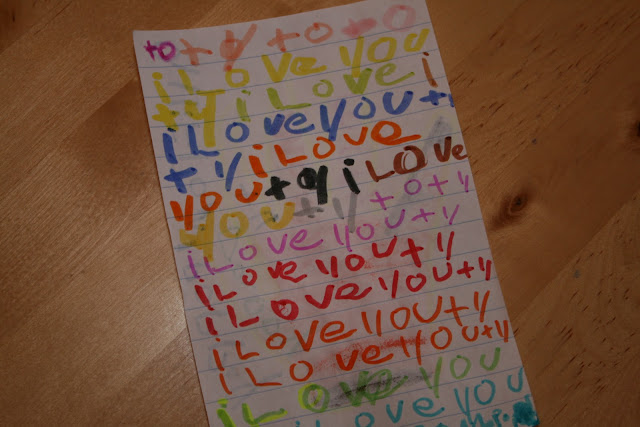 Yesterday we had a crafty playdate at Ty's house and Poppy made this beautiful valentine's day garland... 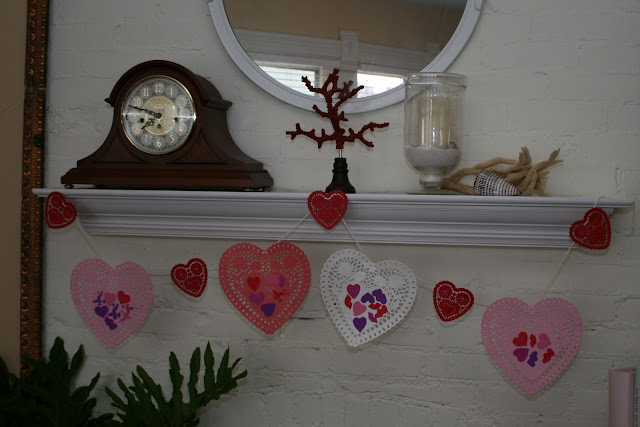 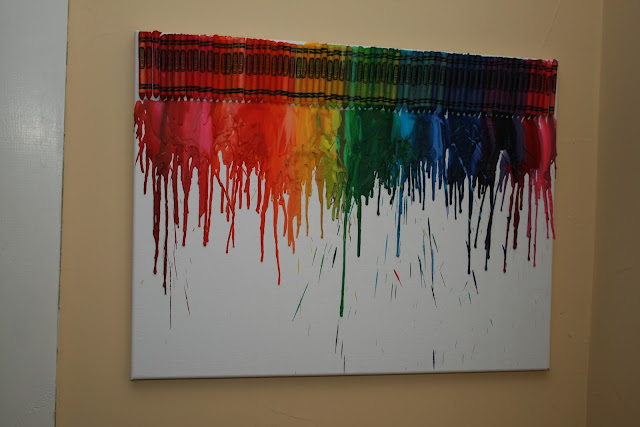 And you know how I feel about owl crafts... 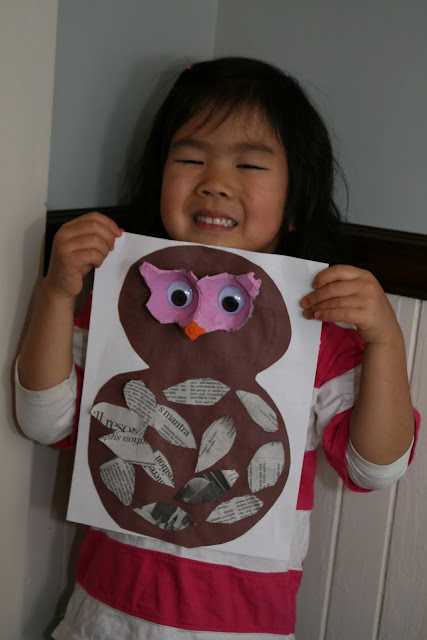 And I had a surprise 40th birthday party to go to last weekend and when I saw this idea on pinterest, I knew it would be a hit.  And it was so easy to put together! 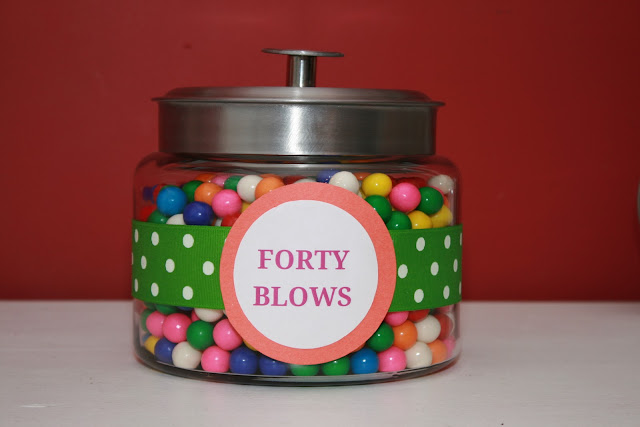 1.  Finding a school for Poppy for next year.  This one has been both stressful and time consuming.  Because we live in the city, we can't just send her to our neighborhood public school (well technically we can, but it wouldn't be a school that you would ever want to send your child to).  We've been researching, attending open houses and testing for a variety of schools.  So far our choices are:
- a public school that has a large gifted and talented program.  Poppy recently went through IQ testing to see if she would be eligible for the GT program, and we also entered her name in for the lottery for the non-GT part of the school.  There are over 1000 applicants for both of these programs and there are only 60 spots for both programs, total.  Which means her chances of getting into this school is slim to none, but we're still holding out hope.  This school would be our first choice.
- we have been looking into two private schools.  I hate the idea of paying so much for her elementary education, but if we had to, we absolutely would.
- we are entering her name into the lottery for two charter schools in our area.  We're still doing the research on these schools.
And I'm so sick of thinking about this.  It's really stressful.  All of the lotteries and test results are announced in early April, so now we pretty much just sit back and wait.  Ugh.

2. Baking bread!  I have been trying to bake our own bread for the past 3 years.  This has resulted in a lot of really, really bad loaves of bread.  I've thrown in the towel quite a few times, but recently tried again, this time with the help of a bread machine!  I borrowed my MIL's and gave it a try.  The very first loaf was a success, but still needed some tweaking.  Finally, this morning I made the absolute most perfect loaf of bread, ever!  I am so proud of myself!  I can't believe it has taken me 3 years to do it, but I did and now I see lots of yummy fresh bread in our future.

3.  Playing nurse.  Sam got his first stomach bug this week.  Yuck.  And then Poppy got a touch of it and Marc got it.  Double yuck.
4.  Making green smoothies!  For Christmas I got a Blendtec blender and it has changed my life!  (ok, not really, but I do love this blender!!!)  I have been drinking green smoothies every day for the past 6 months and I was burning out the motor on our old blender.  Now that I have my super powerful blender, I make even more smoothies and everyone drinks them with their breakfast.  Poppy has been going through a major growth spurt and she is so proud to tell everyone that it's because of the spinach she puts in her smoothies.  Both Poppy and Sam can be pretty picky about their veggies, so I love the fact that they get their daily dose first thing in the morning.  Here's the recipe I started out with...

1 apple, cored and sliced (but keep the peel on!)
1 banana (I freeze mine first so that the smoothie is colder)
juice of 1 lemon
handful of frozen fruit (we usually do strawberries)
2 handfuls of fresh baby spinach (the more you drink these smoothies, the more spinach you'll want to add!)
1 cup water

Blend and enjoy!  You won't believe how great these smoothies taste and make you feel!

5.  Piano practice!  Poppy has been doing so great at practice that her teacher has asked her to perform at a concert.  I cannot believe that she is going to be performing all by herself on a big huge stage in front of hundreds of people.  She is excited and ready!

So, yeah, that's what I've been up to.  Super exciting stuff.  I've also started really thinking about how my maternity leave is almost over (well, I do have 7 more months left, but that will fly by).  I have all sorts of thoughts and feelings about this, but that's a post for another time...

Sometimes, I think the way these two get along is too good to be true.  Sam is absolutely smitten with Poppy.  He is her little mimic- he just follows her around and does the same exact thing she does all day long.  And she loves it. 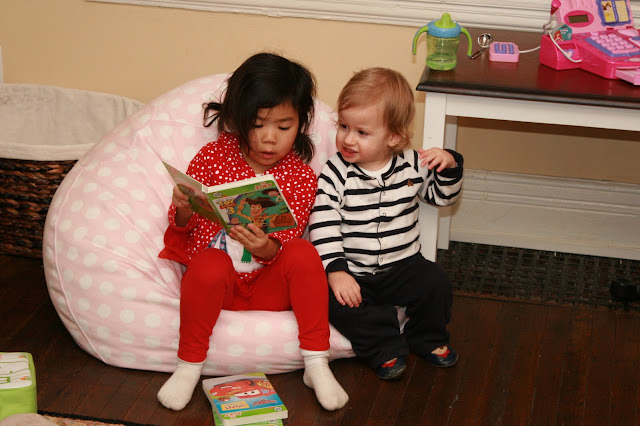 ...............
Yesterday morning, Poppy woke up and whispered in my ear, "Mommy, last night I had a dream that we made a cake with m & m's!".  So when she came downstairs after her rest time I had a cake all ready for her to frost and decorate with m & m's.  Just doing my part to make dreams come true! 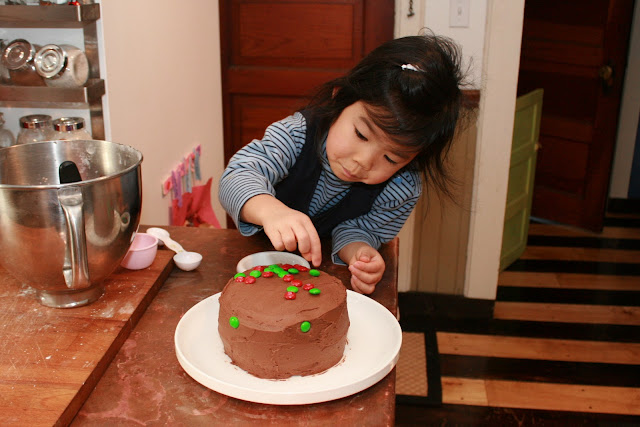 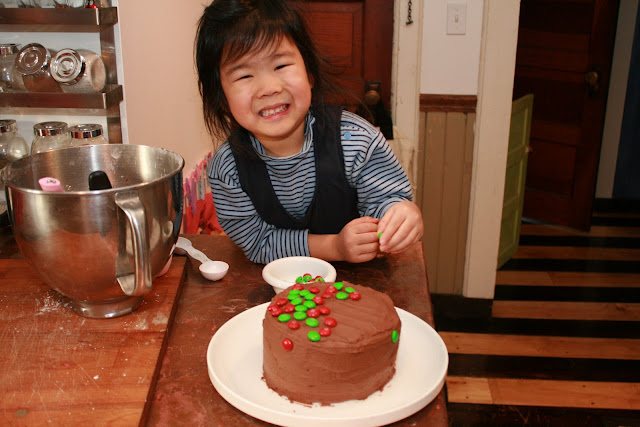 To say that she was in heaven would be an understatement.  Love, love, love being able to do simple things like this with Poppy. 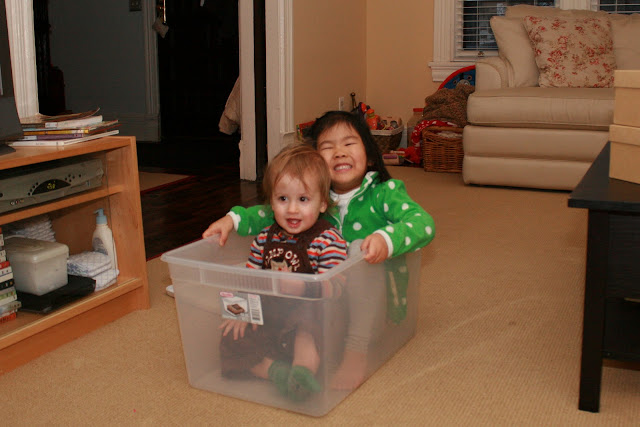 Our new year's eve tradition is to go to our favorite Korean restaurant for dinner.  We always get there super early and are usually one of the only families there.  We all look forward to this night all year long.  So you can imagine our shock and disappointment when we pull up to the restaurant only to discover that they are closed for the holidays!!!  I had to pick my jaw up from off the floor, just as Sam started crying in the back seat because he was hungry and Poppy started whimpering about how badly she wanted rice.  We thought fast and headed over to the only other Korean restaurant in WNY, which is more of really casual, almost to-go place that we've never been to.
Unfortunately, the food was really disappointing, well at least for me and Marc it was.  Poppy and Sam absolutely loved it (because it involved rice and noodles!)... 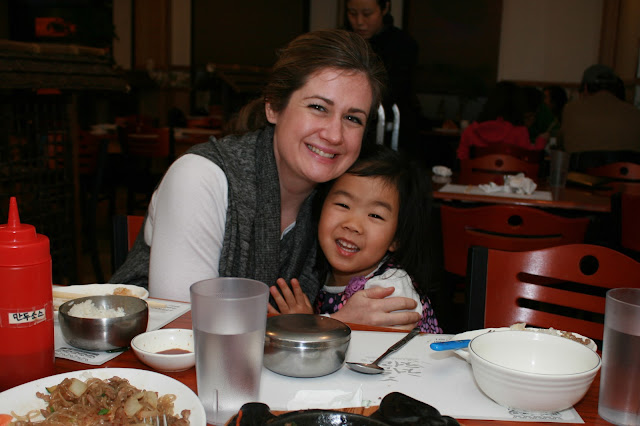 And I got scolded for dressing Sam in red.  Apparently only girls should be dressed in red!  Have I ever mentioned how often Sam gets called a girl?  Almost every single day!  Poor kid.  At least his sister can relate (everyone thought she was a boy up until she was about 3 years old). 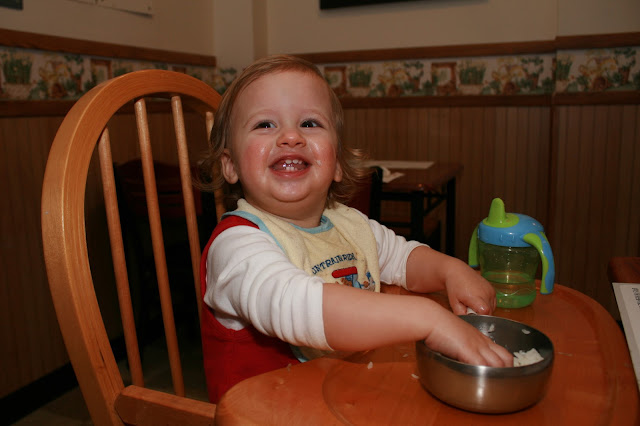 More important than the food was the fact that we were celebrating the new year together.  2011 was a great year for us and I'm hoping 2012 is even better!  Today was spent booking our family spring vacation to Florida which reminds me of how much we have to look forward to this year!
Posted by Amanda on Thursday, January 05, 2012 3 comments