Oh, how I hate that it has come to just slapping up a few pics each month on this blog.  I so desperately want to get back to regular blogging!  Someday.  For now, here are the highlights of February... 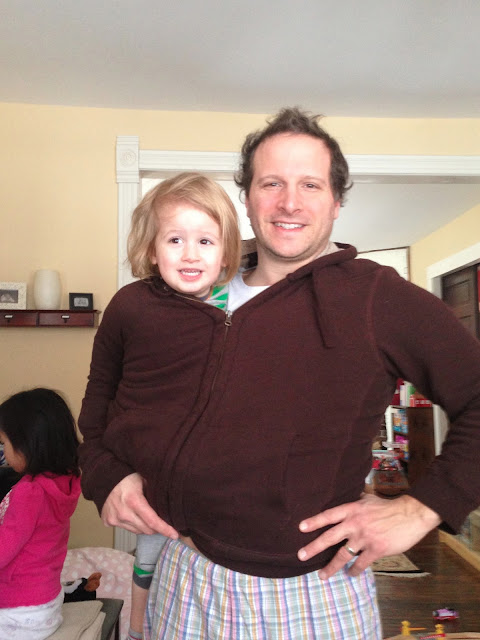 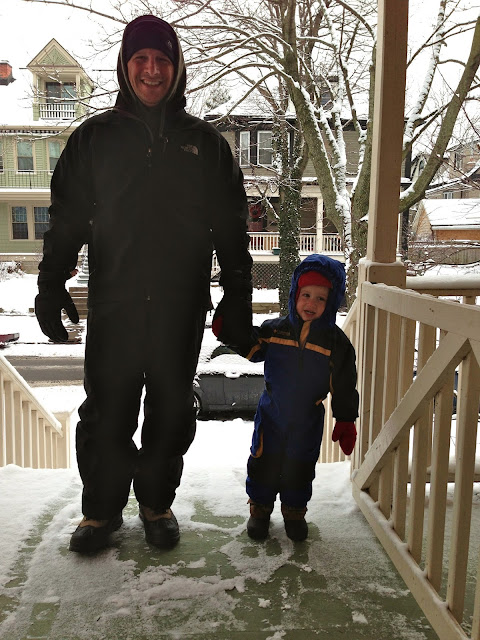 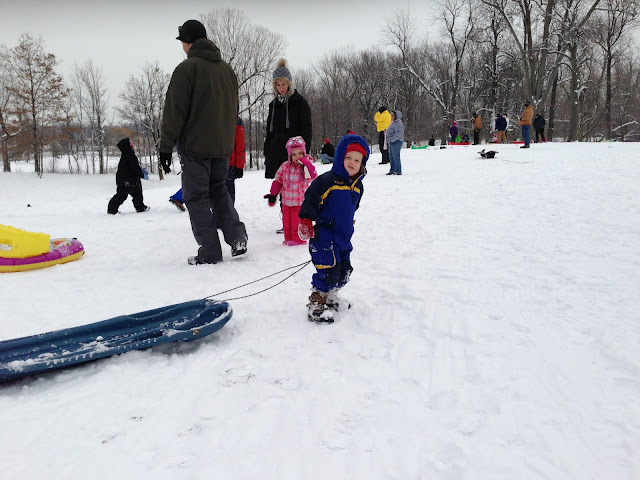 I went into Poppy's school last week to celebrate Korean New Year.  I read a few Korean books to the class and then while they worked on their dragon masks, I made hoddeok (Korean pancakes filled with cinnamon-sugar).  The kids loved hearing about the Korean culture and it was so cute to hear all the kids tell me that they are always jealous that Poppy gets to eat rice with chopsticks for her lunches. 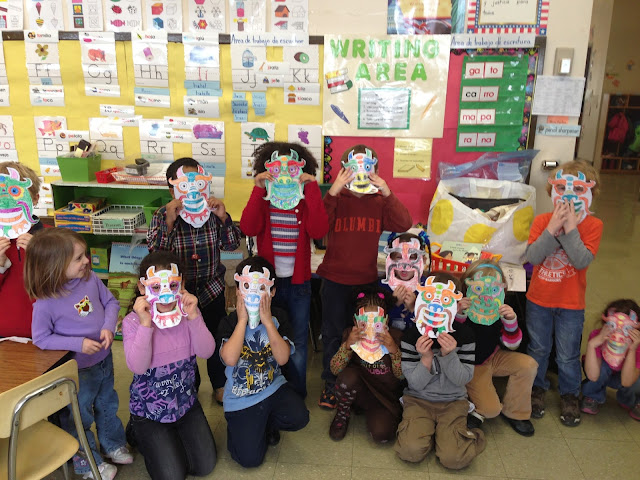 It's hard to believe that at this time last year, we were still unsure of where Poppy would go to school and we were still looking into the different charter schools and contemplating paying tuition for a ridiculously expensive private school.  It was also right around this time last year that Poppy and I were featured on the front page of the Buffalo News with an interview about choosing a school to attend in the city- http://www.pursuitofpoppy.com/search/label/Buffalo%20News

I'm not sure if I've ever really written about the school that she did end up in!  She was accepted into the gifted and talented program at a local public school - Olmsted School 64.  Basically, this is a normal public school, but it has a huge gifted and talented program.  Poppy gets pulled out of the classroom, along with about 5 other classmates, every other day for a GT class.  In kindergarten, they work a lot on discussing creativity and brainstorming.  The teachers also work together to determine any special interests a student may have and then they have additional GT classes for different areas.  Sometimes they have a GT science class and they work with the Buffalo Museum of Science for different activities.  Poppy is currently in a GT math class which she is loving.

But the biggest part of this school that we love is the Dual Language Immersion Program that Poppy is in.  We heard about this program during the kindergarten orientation and both Marc and I felt that it would be a perfect fit for Poppy.  Basically, her classroom speaks primarily Spanish - all day long.  Her teacher and classroom aide speak 90% spanish and the class is made up of 50% english speaking students and 50% spanish speaking students.  We were a little nervous about how Poppy would do, having no previous experience with spanish, but it is absolutely unbelievable how well she is doing in this class!  The first few weeks were kind of funny because Poppy would come home and admit that she basically has no clue what her teacher is talking about all day long.  But within a month, we were blown away by how much spanish Poppy had learned.  And actually, looking back to the first few weeks of school, Poppy never wanted to buy her lunch, she always insisted on bringing a lunch from home.  One day in mid-October, she asked if she could buy her lunch at school and she came home saying how much fun that was and that she would like to start buying more often.  I honestly think that the reason she never wanted to buy previously was because in her classroom, she had to tell her teacher her lunch order in spanish and during those first few weeks, she couldn't do that.  Once she was comfortable and knew enough spanish is when she started buying her lunch!

The goal is that the students in the dual language program will be fluent in both English and Spanish by 5th grade.  And once you are enrolled in the program, it is mandatory that you stay in it throughout the rest of the elementary grades.  There is only one classroom at each grade level that is in the dual language program, so she will always have the same classmates, which is another unique aspect to this program.  This year I was the room mom and I couldn't have asked for a better group of parents to work with.  The diversity in this class in unbelievable.  One time when I went into the classroom to read a story, we started talking about the place where you were born.  I told the class that Poppy was born in Korea, which is really, really far away.  One by one, the students started raising their hands to tell me where they were born - Ecuador, Spain, Nicaragua, Puerto Rico, Canada, Argentina.

So yeah, we basically hit the jack-pot with this school.  We love that she is being challenged with the language component and GT.  We really love the diversity.  We couldn't be happier with her teacher.  And then as far as the physical school, it is under construction this year (has been for the past 2 years) so they are at an older school on the East side for the remainder of this school year.  The construction will be complete this summer and in the fall Poppy will be able to attend school at the brand new building.  Well, it's actually an old building with a new addition.  Here are some pics I took today when we drove by... 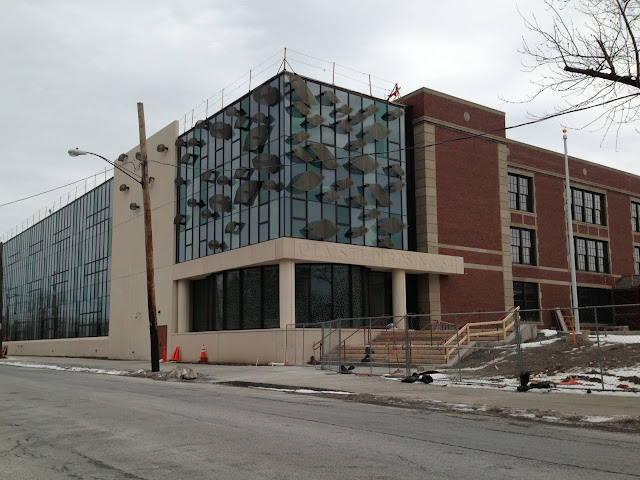 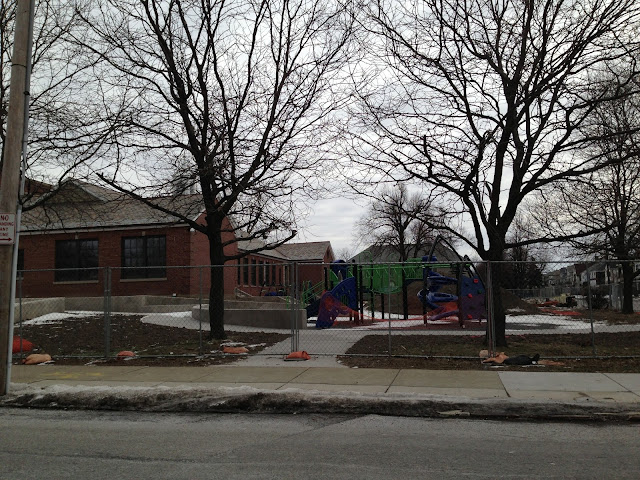 These pics don't even do it justice.  It looks amazing.  Poppy gets so excited each time we drive by.  And now we all just have to hope and pray that Sammy will be able to attend the same school. (They don't have a sibling preference because it's not our "neigborhood school" so Sam will have to get in either through the gifted and talented testing or through a lottery.  Yikes!  We're nervous about it already! 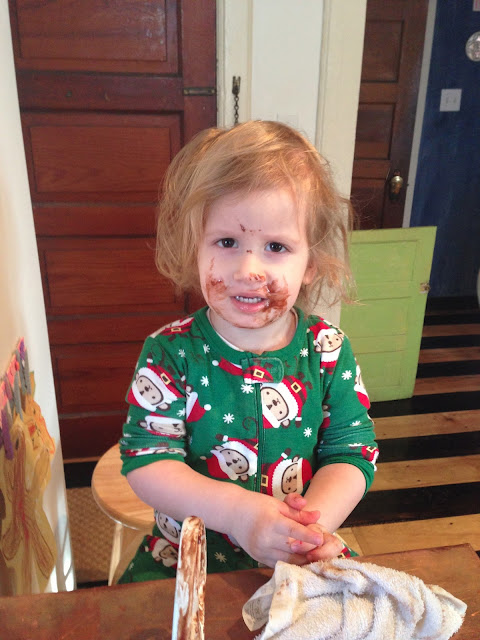 {One of my favorite kitchen helpers.} 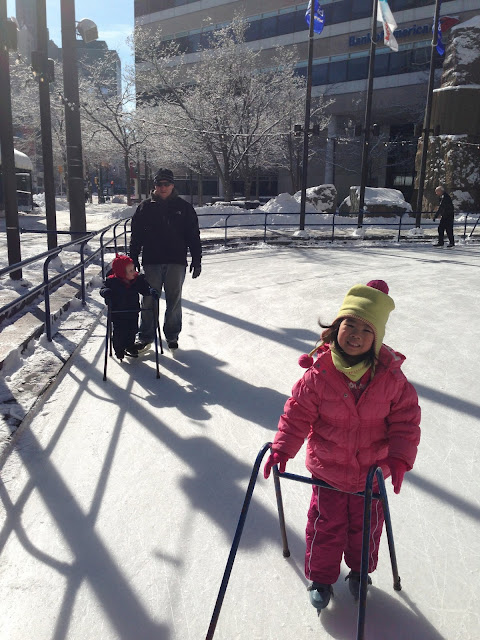 {We went ice-skating at Rotary Rink downtown.  There must be some sort of trick to teaching kids how to ice skate and apparently neither me or Marc know that trick.  We all still managed to have fun though!} 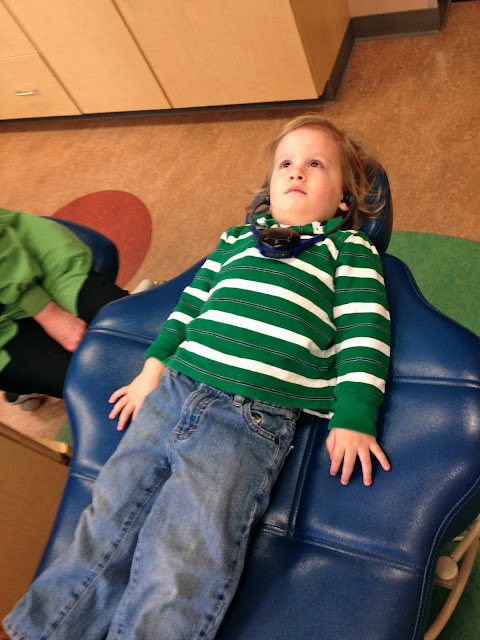 {Sammy had his first dental cleaning in the big boy chair!  Despite the look on his face, he did great!  And it cracks me up that when my mom saw this pic she said he looks like is awaiting execution.  Ha!}

Check out these adorable hats my mother-in-law knit for Poppy and Sam for Christmas.  I found the pattern on pinterest and I can't get over how cute they turned out!  And they are so cozy warm! 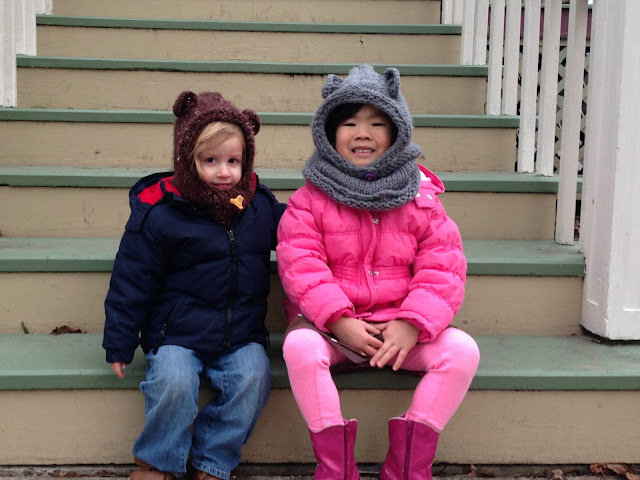 Marc and I had our annual night of curling in Canada.  Good times! 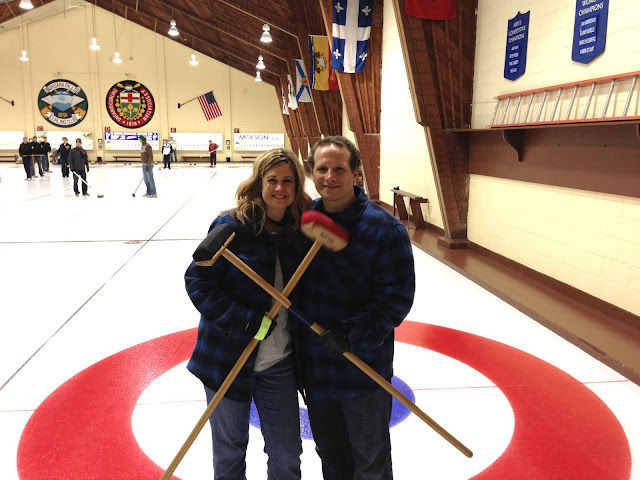 We got hit with a bit of a snow today and Sammy is loving it!  This kid would live outside in the snow if we let him.  He was out here for over an hour and he had an epic tantrum when Marc brought hime inside because it was dinnertime... 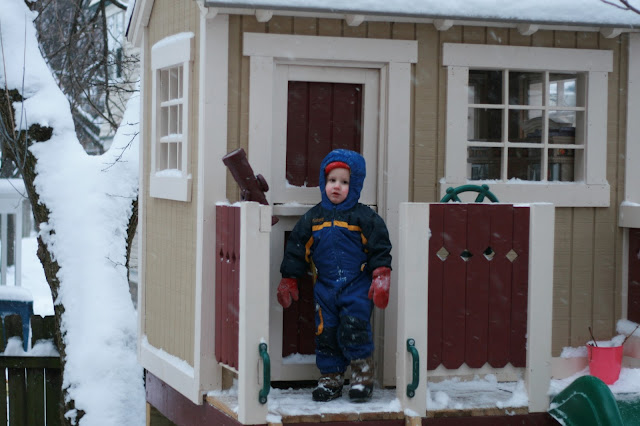 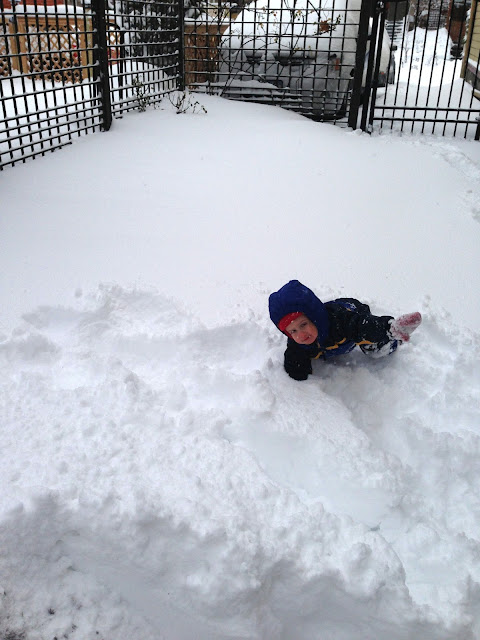 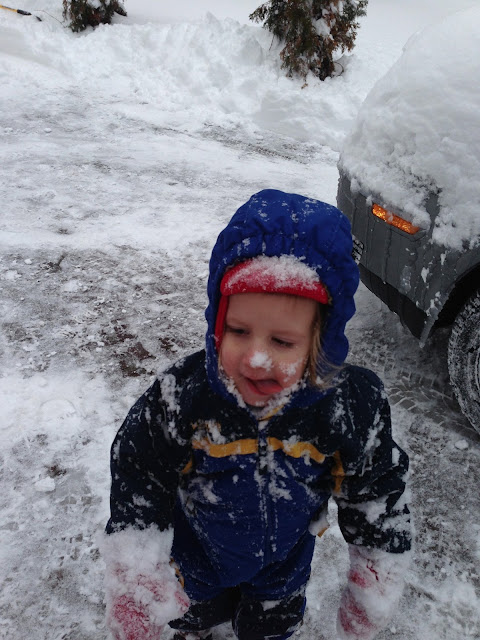 We've been spending a lot of time at home this month, just relaxing and being together.  And working on potty training!!!  People always say how much more difficult it is to potty train boys, and guess what?  It is!  I feel like we've been working on this forever! 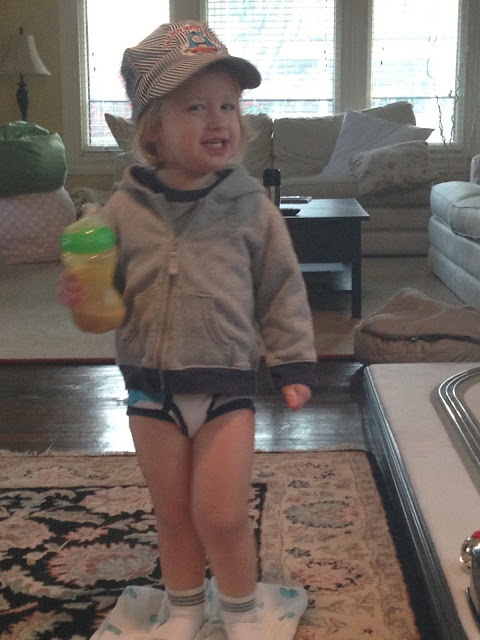 And this is not from January, but back in November Poppy lost her first tooth, followed by a second a few days later!  It was pretty exciting stuff! 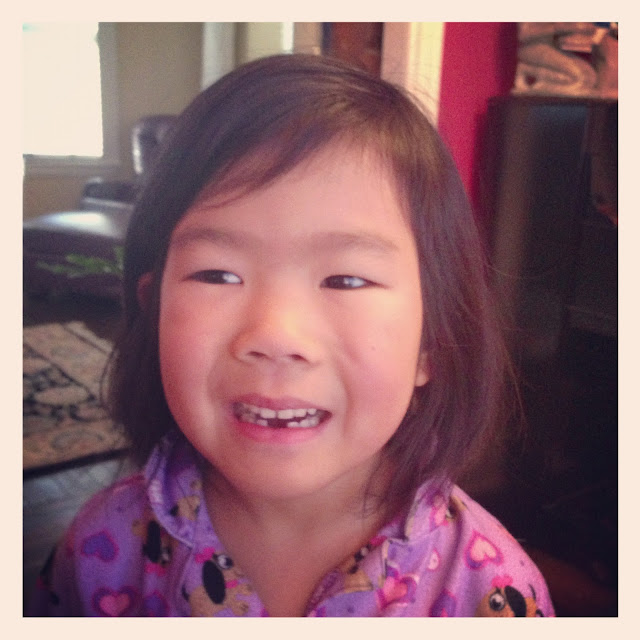 And once we realized how often the tooth fairy is going to be visiting our house over the next couple of years, we decided it was necessary to get a tooth fairy door.  (we made it out of doll house pieces and we love the way it turned out)  Poppy loves having this secret door in her room... 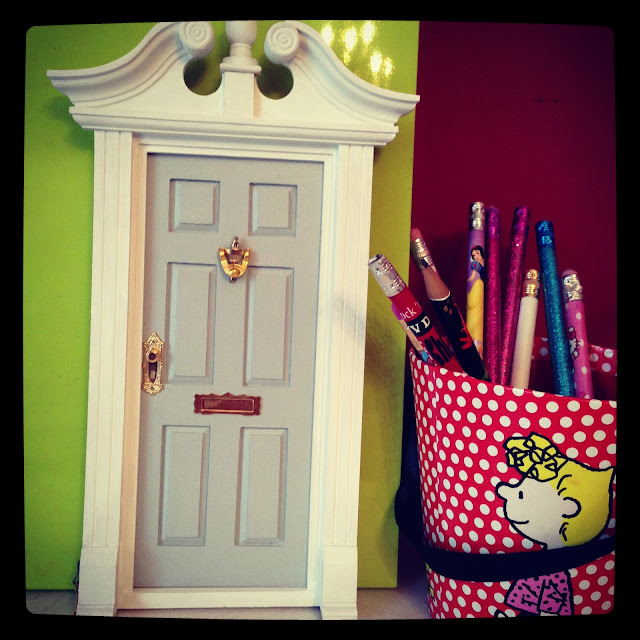