Poppy and I have been doing quite a bit of baking in the kitchen lately.  I came across this idea a few weeks ago and decided it would be the perfect dessert to bring to Pizza Thursday.
First thing in the morning, I made the cookie dough and let it chill in the fridge.  When it's time to make the cookies, you just take a ball of dough and smoosh it into a free form shape that would resemble a puddle.  That was super fun and easy for Poppy to do.
Then it was time for the icing, which is when I began to think that this was going to be more of "project" than I originally thought.  I almost scrapped the whole thing, but Poppy was super into, so I trudged ahead and made 1 big batch of icing and added food coloring and used sandwich bags for the piping.  It actually turned out to be pretty easy and super fun to do. 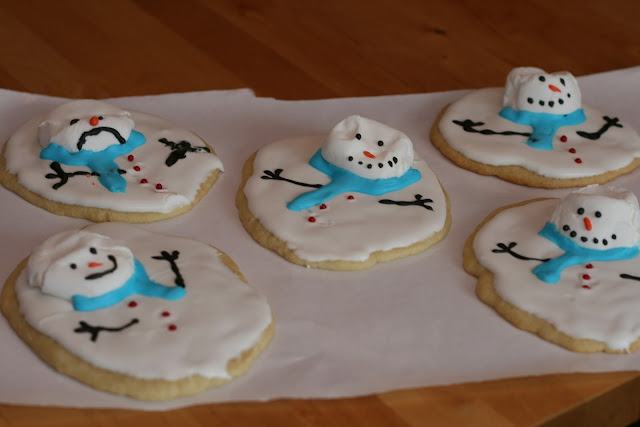 Poppy kept saying that she wanted her snowman to be making a sad face because Frosty would be sad when he started to melt.  (can you guess which one is hers?)  Needless to say, they were a big hit with the cousins on Pizza Thursday!
Here are the recipes I used...
Sugar Cookies
1/2 stick of butter
3/4 cup white sugar
1 egg
1 teaspoon vanilla
1 3/4 cups flour
1 tsp. cream of tartar
1/2 tsp. baking soda
1/2 tsp. salt
Royal Icing
4 egg whites
4 cups sifted confectioners' sugar
1 teaspoon almond extract
Posted by Amanda on Tuesday, January 25, 2011

This is why we need to live closer to each other! We "made" those cookies too... but ours didn't come out so photo-worthy. I might need to attempt them again after seeing yours though... Adorable!

Yum. I ditto Christine on living close by but only because I want to eat all of your goodies!

Those are so cute! I was thinking that was melted marshmallow and not a pile of icing. I'll move to Niagara so that I can pop over for treats :)

Amanda, I love them....
How supper fun for everyone
Carolyn

That is amazingly adorable! Love. Them.

THOSE ARE SOOO CUTE!!! I am soo gonna steal this idea!!!

Very cute and Brendan loved his. I hope you got the message that Brendan left on Marc's phone!