(this post is almost 2 weeks late, but vacation and laundry took precedence) 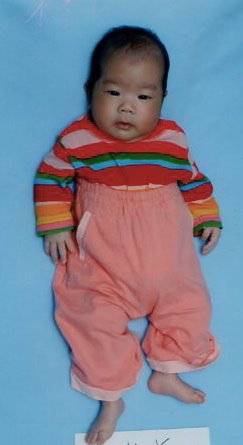 A little over a year ago, our lives changed forever. The day we saw our daughter for the first time is one that I will never forget. But looking back at my post from that day, I think I was so overwhelmed, that I really didn't post any details about how our referral unfolded. So here goes...

Well first I have to give a little background info about our switch from the Vietnam program to the Korea program. Towards the very end of February, rumors were flying that the Vietnam program would inevitably shutdown, probably within the next 6 months. At the time, we were with a very small agency that so far had received no referrals. One day it just hit me that there was no way we would receive a referral before the rumored shutdown. I told Marc about this intuition and asked him if he thought we should start looking into other countries, other agencies. His reply was a firm "absolutely not". He thought it was ridiculous to jump ship before it was even confirmed that the program was going to shutdown, and his biggest concern was that we simply could not afford to walk away from the money we already spent on Vietnam, and pursue another adoption. A few tears were shed by me, then we both came to the agreement that we would wait a month, and then re-visit this conversation. Well, about 2 days later I brought it up again, but this time I was armed with reinforcements - our best friends, Andy and Christa, who recently began a Korean adoption. We all went out to dinner and I brought up our predicament, and they were both in agreement with me that we should pursue a Korean adoption asap. Lo and behold, by the end of the dinner, Marc was considering looking into it!  (talk about peer pressure!)  First thing Monday morning, I began calling agencies. A librarian I work with mentioned this small agency that only did Korean adoptions, located in Pennsylvania, called Love the Children, that she adopted her son through 5 years ago. I gave them a call and explained our situation to their director and she agreed to work with us and set me up with their local social worker. The social worker was having an open house the next weekend and said that it was important that we try to attend. Marc agreed to go, even though he was still on the fence about switching, and it was about an hour and a half away. The open house was great because we got to meet other couples that were at all different stages of adoption, including a few couples that recently brought their adorable children home from Korea! This one little girl kept smiling at Marc and sat right in his lap and started playing with his curly hair. It was one of the cutest things I had ever seen! By the time we got in the car, Marc was like "You have the application, right? Did you ask the social worker when we can schedule a homestudy?"  Decision made!  I called our VN agency and put that adoption on hold and then sent our Korean application in.  Now talk about a speedy timeline - our social worker was able to come over within a few weeks of that first meeting. (unfortunately, we had to have a completely new homestudy done.) She came over on a Saturday, and then on the following Monday, I received a phone call at work from our new agency. At the time of the phone call, I was in a meeting with 2 other librarians, in my own library. I told them that it was my agency and that I needed to take the call, so I went into this little closet in my library for privacy. It was the secretary and she said that they received all of our paperwork and that the social worker expedited our new homestudy to them and then she had a few questions about our taxes, etc. She then said that the director would like to talk to me for a minute. The director (who is an older Korean woman with a very heavy accent) came on the line and said, "Amanda, I have a beautiful baby girl for you!" It was probably the last thing in the world that I expected her to say -because #1, I knew that this agency moved very quickly, but I absolutely did not expect it this quickly! and #2, since we switched to the Korea program, we were expecting the referral of a little boy, which were excited about, but we had been planning to have a little girl for almost a year, so deep down we still wanted a little girl. So needless to say, I let out a howl/scream. Tears, there were lots of tears. And then she just kept on talking - she started telling me all about her birth parents, her height and weight, that she was already trying to walk, what she liked to eat, that her birthday was on our wedding anniversary, and that she matched us with her because she thought that she looked like Marc (?!). There was so much information and I was still sobbing and all I could think of is that I needed to talk to Marc. I jotted down as much as I could and then she told me to call my social worker asap to set up a time to go see her picture.

I came out of the closet and the other 2 librarians were staring at me, tears were streaming down my face, and I screamed "I'm a mama!".  Coincidentally, the substitute that was covering for me while I was in my "meeting" that day, was my best friend, Andrea.  It was pretty cool to have her there to share in such an emotional moment.  So there was lots of hugging, and then I said that I needed to get hold of Marc. I grabbed my cell and called him at work. Voicemail. I called him on his cell. Voicemail. I called both his work and cell for about 20 minutes straight. I finally called the main number at his work and told the operator that I was Marc's wife and that there was an emergency and I needed to get a hold of him. He was out of the office working on a job, but they were able to locate him and patch me through on a work cell. Our conversation went like this:

me: It's a girl! (quite inaudibly because I was crying so hard)

Marc: What do you mean?! What are you talking about?!?!

me: The agency just called and we have a baby girl!!!!!! And she looks like you!

Marc: sniffle. Are you serious? I can't believe it Amanda, all of our dreams just came true. We're parents!

Needless to say, more tears were shed and I told him to meet me at home, asap. We couldn't get a hold of our social worker, but she lives an hour and a half away, so we decided to just start driving out to her house and left her a message that we were on our way. We were almost to her house when she returned our call, saying that she has the picture of our daughter, but that she wouldn't be home until about 8pm that night, and that we were more than welcome to meet her then. Ugh. So we decided to go to P.F. Chang's for dinner to try to pass the time. I couldn't eat a thing.

Finally, the clock struck 8 and we were at her house, ringing her doorbell. She invited us into her office and asked us if we would like to hear all of the information about her first, or see her picture first. Picture! Tears, lots of tears. What an indescribable feeling. She was the most beautiful thing we had ever seen. Marc even said that she looked like an angel, which was unusually corny for him. She then told us about her background information, but again, I could barely pay attention, my head was just swirling. And then within minutes, I had this intense feeling of, "That's my baby!  But she's on the other side of the world.  And someone else is taking care of her! I need to be with her NOW!!!"  A feeling that, unfortunately, I had to deal with for the next 3 months. But it was all worth it, so, so worth it.

We were lucky to survive the car ride home because Marc was driving and he refused to turn the light off and stop staring at her picture. It was late by the time we got home, but we still had to stop at our parents houses to share the exciting news. We were so exhausted, but it was such an incredible day.

So that's my story. A year late, but the memory is still so strong that it feels like it was just yesterday. I hope it always stays that way.
Posted by Amanda on Thursday, April 23, 2009

I absolutely *love* this story! What a wonderful memory and beginning to share with Poppy someday. She'll have no doubt that she was loved from the get-go. Thanks for sharing all these details!!!

Oh Amanda, I am crying as I read this post. It brought back so many feelings that I had when we finally got the call. Man the relief! What a wonderful story to tell to Poppy one day.

I can't believe how fast it happened for you but clearly you got it done just in time so that you could have the daughter that was meant for you.

Congrats on your 1 year referralversary!

*sniffle* What a great story. Thank you for sharing it!

As tears are streaming down my face, I am amazed at how blessed you are and how God works everything in such an awesome and amazing way. Congratulations on your 1 year anniversary! Thanks for sharing.

It does seem like yesterday and the story is so vivid as the day you called me! Congrat's on such an amazing blessing! Tears and laughter come to mind because I remember it just like yesterday "convincing Marc" to switch programs! Tears of Joy!

I am laughing because I remember vividly Andy saying, "Oh, what's a few more $$ at this point..just do it!" And then, the peer pressure from Marc when he turned to Andy last October and told Andy"Oh, whats a few more $$ just do it!"

omg...i've got tears. that's amazing! soooo meant to be! yay.

Amanda, what an amazing story. I got goosebumps.

Thanks for opening the floodgates this morning...

I am so glad you decided to post the backgrounder on your adoption. It was all meant to be with a Korean adoption and ultimately with Poppy.

As I sit here feeding breakfast to Colin, I think where we were a year ago without him. It just seems all so complete now.

As I heard the whole story, I was crying so and am so glad you shared it with us. We are very lucky people and lucky to have Poppy in our lives.

[Finally catching up and what a great post to start with!]

What a wonderful story! I'm typing through teary eyes and I have happy chills.

I'm so happy I now know the "back story" to your journey, it makes reading about where you are now that much sweeter!